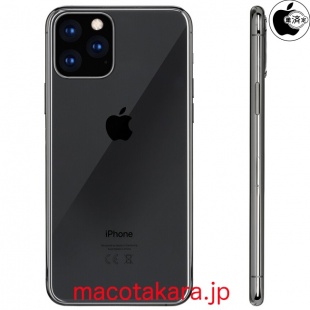 Citing reliable sources in the Chinese supply chain, the report claims that the two new iPhone models would come with 6.1-inch and 6.5-inch OLED displays and the rumored triple-lens camera system.

The report goes on to suggest the two new models will have a thicker body to compensate for the larger camera module, so the 6.1-inch model will be around 0.15mm thicker than the existing iPhone XS, while the camera bump will see a 0.5mm reduction in protrusion.

Likewise, the body of the 6.5-inch model will supposedly be 0.4mm thicker with a camera bump reduced by 0.25mm, which equates to an overall 0.2mm thickness increase over the current iPhone XS Max.

Macotakara claims the two new models will come with a USB-C to Lightning cable and an 18 Watt USB-C power adapter, with an ability for the rear of the case to wirelessly charge Qi-compatible devices like Apple Watch and AirPods 2 “likely.”

In general, the rumor mill narrative suggests triple lens camera systems are a given this year, but previous leakers – OnLeaks in particular – have implied that the three-lens camera won’t be exclusive to any one iPhone, and surely not a feature of additional models.

Given the leftfield claims, today’s report should be taken with a grain of salt, although Macotakara has provided accurate information on unreleased iPhones in the past, so it’s still possible there’s something in it.