Apple CEO Tim Cook this afternoon encouraged his Twitter followers to check out the new Statue of Liberty augmented reality app for iOS, which was conceptualized by Diane von Fürstenberg to celebrate the launch of the Statue of Liberty Museum this Thursday.

According to the Vogue article on the app, it was created by the Statue of Liberty Foundation and Yap Studio. Its creation took more than a year of scanning and photography, and it offers up a time-lapse view from the statue’s eyes, a look inside of it, and a time-lapse of how the color changed over time. 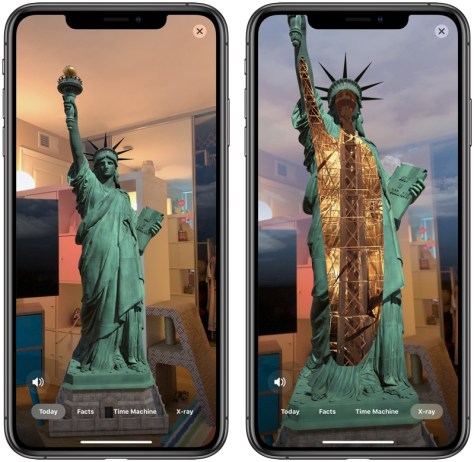 The main feature, though, is several 3D models of the Statue of Liberty that can be projected into your own home. There’s a full-size model plus close-ups of the torch and the Statue’s foot.

The app is designed to help visitors to the museum and those who are viewing from home understand the construction and the detail of the Statue of Liberty, thanks to augmented reality. Apple was one of the donors of the project after Diane von Fürstenberg connected Tim Cook and the Statue of Liberty Foundation. 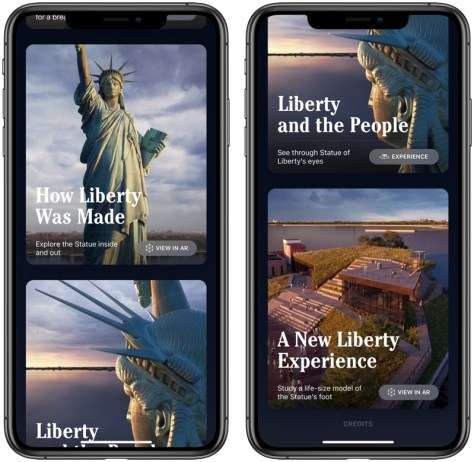 “I met Tim Cook from Apple, and discovered first of all that he had never been to Liberty Island, so I arranged for him to go,” DvF revealed. “Not even knowing what I was talking about, I said, ‘Wouldn’t it be wonderful to give people an Apple experience when they go on the Island?’ I met the people who do apps and we started, not knowing where it would all end up. The foundation created this app that will reach hundreds of millions of people. It will be the biggest opening of a museum ever!”

Apple execs, including Tim Cook, have continually touted the capabilities of augmented reality and its potential to change the world, and the Statue of Liberty app is one example that could inspire other museums and historical sites to take on similar projects.

“Augmented reality really lets you place literal objects and experience into the real world around you,” DvF said. “It allows you to learn about the statue and the experience. You can place the Statue of Liberty in a class room or a living room; it’s available in the Apple store in 155 countries, and with one billion devices in peoples’ hands, our museum experience goes from New York to the globe!”

There’s also a new “Raising the Torch” podcast, and von Fürstenberg says that a documentary about the Statue of Liberty will be released later this year. The podcast will feature different historians discussing the Statue’s historical context and past.

The Statue of Liberty app can be downloaded from the App Store for free. [Direct Link]