More than 40 million Android smartphone owners around the world have now installed the Apple Music app from the Google Play Store, according to data shared this week by Sensor Tower.

Apple has been able to grow its Android user base for Apple Music in mid-to-late 2018, following a few quarters of decline. Beginning in Q4 2017 and continuing through Q2 2018, Apple Music installs on Android dwindled from 3.3 million to 2.3 million. 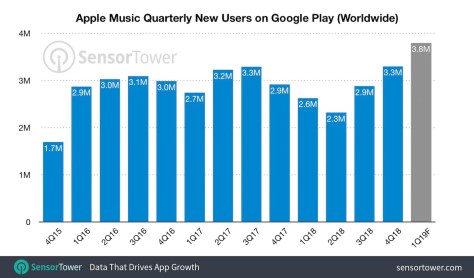 Now, the current quarter is anticipated to be Apple Music‘s best yet for new user installs on Android.

Google Play users in the United States account for approximately 28 percent of all Apple Music for Android installs to date, with India a distant second at about 7 percent to the total. Great Britain, Brazil, and Russia round out the app’s five largest markets at 6 percent, 5 percent, and 4 percent of installs, respectively.

Apple Music first launched on Android in the fall of 2015, months after debuting on Apple devices. The Android app was just updated this week with a redesigned Browse tab to match iOS devices, and introduced support for Chromebooks.