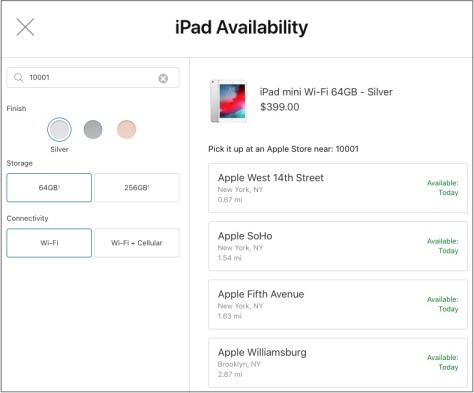 This feature enables customers to purchase a new iPad on Apple.com and pick it up at a nearby Apple Store at a designated time. The tool can also be used to monitor inventory of the new iPads at Apple Stores based on zip or postal code, with both models currently available for pickup today at many locations.

The new iPad mini’s only notable differences versus the new 10.5-inch iPad Air are its smaller 7.9-inch screen and lack of Smart Keyboard compatibility. The new iPad mini also has a lower starting price of $399 versus $499 for the new iPad Air.

Apple is currently quoting an April 15-17 delivery estimate for standard ship-to-home orders, so in-store pickup looks to be a quicker option.

The new AirPods are also available for Apple Store pickup.