Over the past few months, supplies of the LG UltraFine 4K and 5K displays have dried up at Apple’s retail and online stores, leading to speculation on the future of Apple-approved displays beyond a rumored ultra high-end 6K display perhaps coming alongside a revamped Mac Pro later this year. 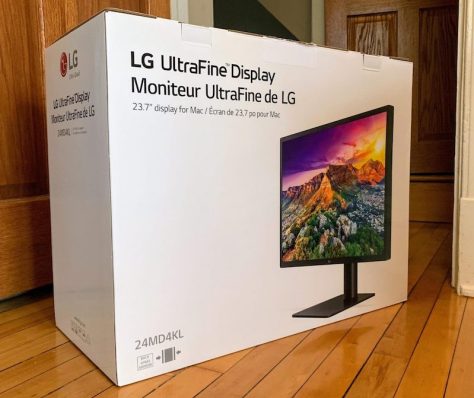 As shared by TidBITS, however, Apple retail stores are now quietly carrying a new $700 23.7-inch UltraFine display from LG. TidBITS’ Julio Ojeda-Zapata was able to locate the new display in two different Apple retail stores, but it is not currently listed in the company’s online store.

To my surprise, an employee told me I should consider forgoing the 21.5-inch model. Why? “Because we have a larger LG display for the same price.” Laid out for me on the floor were boxes for the two monitors—including the 23.7-inch version that had seemingly come from nowhere.

At 23.7 inches, the new UltraFine display sits between the original 21.5-inch 4K and 27-inch 5K display, but there is some confusion over the resolution of the display. Ojeda-Zapata claims that it only offers a resolution of 3360×1890, which would not reasonably allow it to serve as a Retina-quality display, but a user manual (PDF) for the display indicates that its native resolution is in fact 3840×2160. That’s still less than that 4096×2304 resolution of the smaller 21.5-inch UltraFine 4K, but it would at least qualify as an Ultra HD resolution that is typically marketed as being 4K.