In April 2016, Beyoncé launched her sixth studio album “Lemonade” worldwide. While the album was available for Apple users to buy for $17.99 on iTunes at launch, it was never put on Apple Music or Spotify and remained a streaming exclusive on Tidal for three years, until today. 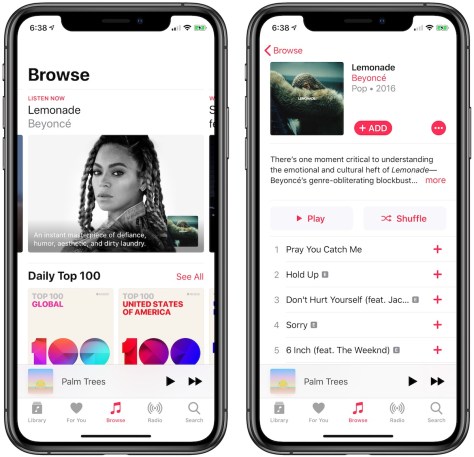 Now, both Apple Music and Spotify subscribers can listen to the 13 track album (with an original demo version of “Sorry”) for the first time. Apple is highlighting the launch on the main carousel in the Browse tab on Apple Music, along with the live album of “Homecoming,” the documentary about Beyoncé’s 2018 Coachella performance.

More recently, Beyoncé and Jay-Z launched a collaborative album under the name “The Carters,” which only remained a Tidal exclusive for two days and then launched across streaming services in June 2018. Before that time, Jay-Z quietly removed many of his albums from Apple Music in April 2017, but most eventually came back. His own album “4:44” had one week of Tidal exclusivity before appearing on Apple Music in July 2017.

Although it’s three years old at this point, “Lemonade” was a huge bonus for Tidal and a way for the company to encourage fans to sign up for the service. The end of its exclusivity follows a rough year for Tidal, with numerous reports about late royalty payments to artists, inflated streaming numbers, and potential data breaches emerging in 2018. The news of late royalty payments and inflated numbers came from Norwegian site Dagens Næringsliv, which specified that Tidal had inflated streaming numbers for “Lemonade”.