If you’re a fan of classic Mac designs, you may be interested in the iBot G3, a figurine that’s modeled after Apple’s iconic iMac G3, first released in 1998.

The iBot G3 was designed by Philip Lee, who previously released another Mac-related figurine called the Classicbot. The iBot G3 is Lee’s latest project, and like the Classic bot, it’s a fun take on one of Apple’s original Mac designs. 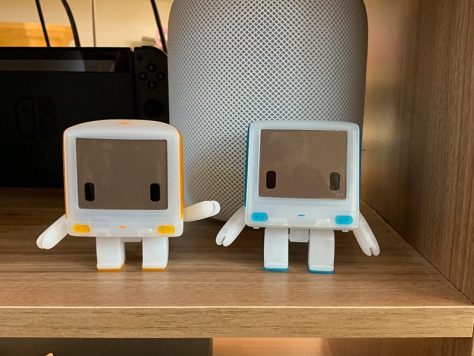 There are two variants of the iBot G3, one in Bondi Blue and one in Tangerine, both of which are two classic iMac G3 colors. The figures are made from plastic and are injection molded with details that closely mimic the design of the original iMac G3. 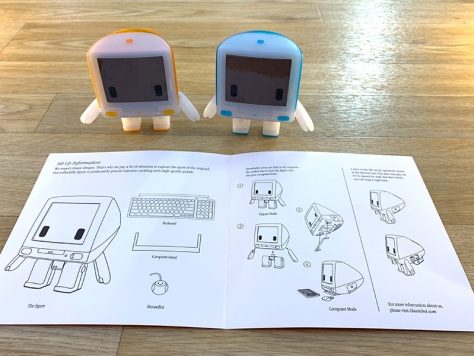 Injection molding allows for the smallest of components to be included, which means you get the classic iMac G3 design with translucent teardrop-shaped enclosure, carrying handle at the top, side hatch that gives a peek into the internal components, and even a tiny round mouse and matching keyboard. 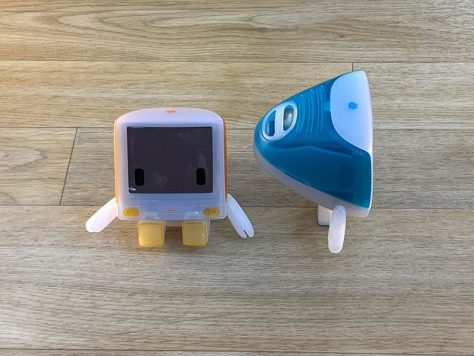 It’s so accurate to the original design that the inside components have also been separately created so you can see the machine’s hardware through the translucent outer shell. 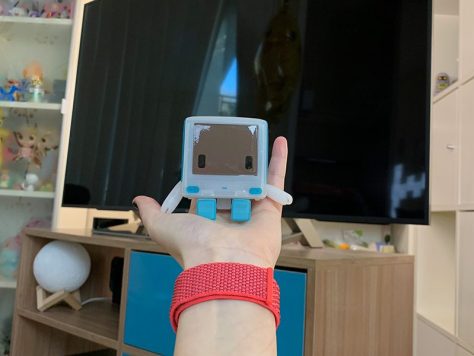 You can see the CRT tubes, the speakers on the front, the vents, the CD drive, the power button (and the power button on the tiny keyboard), all of the ports (hidden by an access panel complete with mouse cord cutout), and the spot where the power cable plugs in. The only thing missing is an Apple logo, as not including one prevents Lee from running into trademark issues. The Apple logos traditionally at the top and the back of the iMac G3 have been replaced with little bot logos. 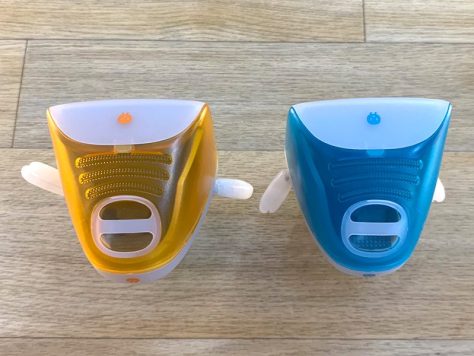 The display of the iBot G3 features two little eyes, because it is, as the name suggests, an iMac that’s been transformed into a robot. It has detachable legs and magnetic arms, and it is able to stand (or sit) on its own. You can remove the arms and the legs if desired, add an included stand, and set it up as a more traditional looking iMac with the keyboard and the mouse as accessories. 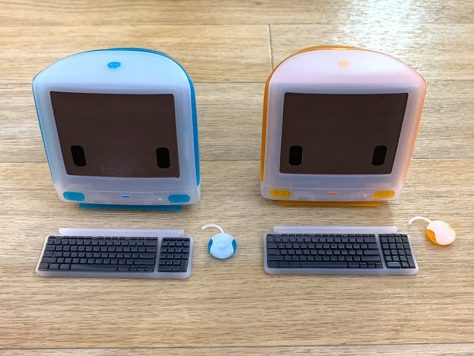 I like that the iBot G3 converts because it allows those who prefer the iMac robot look to use it their way, while others who would rather have a little iMac that looks more similar to the traditional design can disassemble it and display it that way. You can also combine the two, with a sitting or standing iBot G3 that also has the keyboard and mouse nearby. 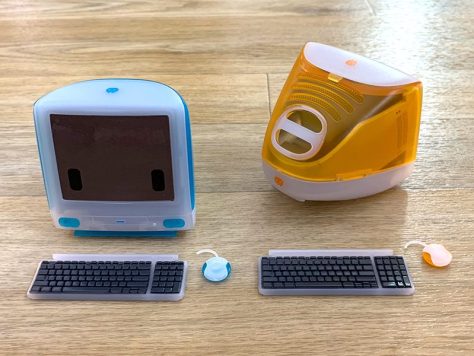 Speaking of the keyboard and mouse, these two accessories are quite cute. The mouse is about the size of my fingernail and is an accurate miniature replica of the original round mouse that came with the iMac G3, while the keyboard features a translucent plastic housing with black keys. 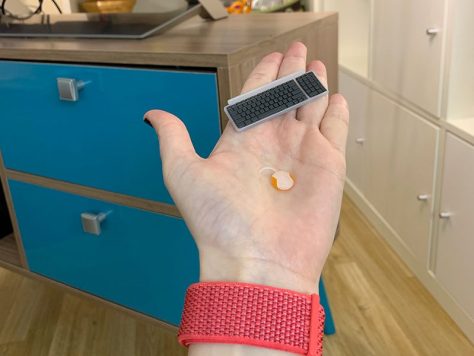 The arms and legs of the iBot G3 are made from the same translucent plastic of the enclosure, so everything matches up well. The display is printed on, which is worth noting. I think it would have been neat if it had an actual electronic display, but that would have driven the cost up and been a lot more difficult to implement.

It would, however, be nice to be able to purchase an iBot with different eye expressions, and I would have preferred a lighter film because the the face of the iBot can be a bit hard to see sometimes depending on the lighting conditions of the room. 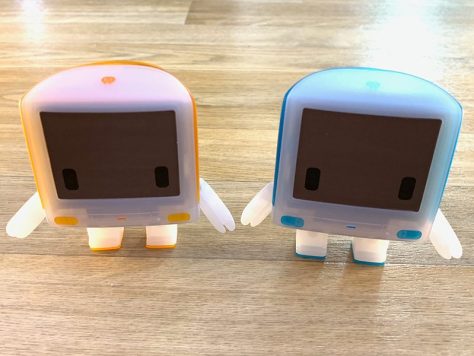 I don’t have an iMac G3 to compare the iBot to, but I do have an iBook G3 that used the same design elements. It’s in Blueberry, which is pretty similar to Bondi Blue (though a touch lighter) so it looks like the color of the Bondi Blue iBot G3 is close to accurate. The Tangerine color also looks quite similar to pictures of the Tangerine iMac G3. 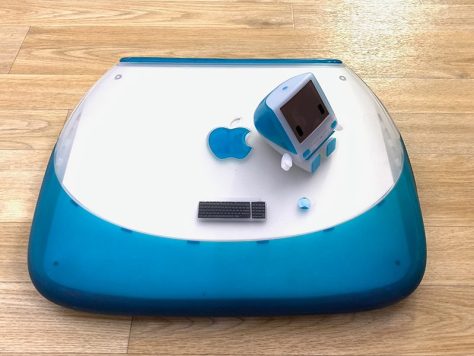 The iBot G3 is not a toy and it is meant for displaying. It is not made of the sturdiest of plastics, and I would not be too rough with it. I did snap off the little hatch that lets you look inside on accident on one of the models, but it snapped right back in place. Still, I was worried about breaking it when trying to put it back together. 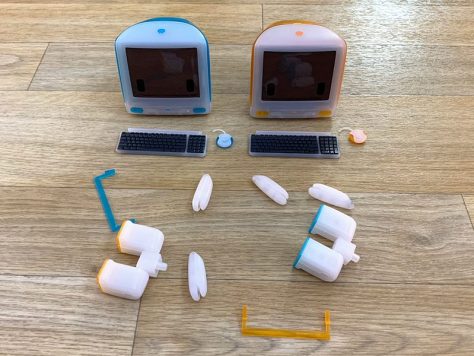 The magnetic connection between the arms is not particularly strong and there are a lot of small components, so this is not an ideal toy for a child. It would be easy to lose the pieces since many of the components are so tiny, and there is a warning on the website that the laminated cover of the display is prone to scratching. I didn’t have any issues, but I was also careful with it. 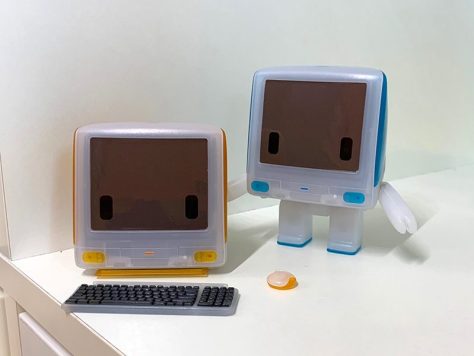 $39 is a little expensive for an inanimate toy, but that’s not unusual for figurines with this level of detail and it seems like a fair price given the attention put in to making the iBot G3 look like an iMac G3.

If you’re an Apple fan looking for interesting Apple-related desk or shelf decor, I don’t think you’re going to be disappointed by the iBot G3. It’s adorable, fits in well with Apple products, and looks good in any home or office environment. 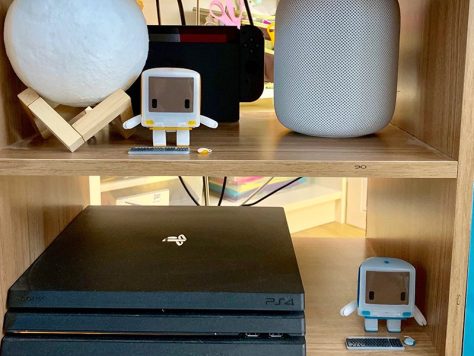 Similarly, if you’re looking for a gift for an Apple enthusiast, the iBot G3 is a great choice that will delight everyone who sees it. Hopefully the artist, Philip Lee, will continue to make additional figurines like the iBot G3 based on classic Mac designs because I’m sure Apple fans would love to have a collection of Apple device bots.

The iBot G3 can be purchased from the Classicbot website for $39.

Note: Classicbot provided MacRumors with two iBots for the purpose of this review. No other compensation was received.