As noted in the MacRumors Buyer’s Guide and discussed in the MacRumors forums, it has now been 602 days since Apple last updated its iMac lineup, a new record for the longest span between iMac refreshes ever. The previous record was 601 days between October 2015 and June 2017 refreshes. 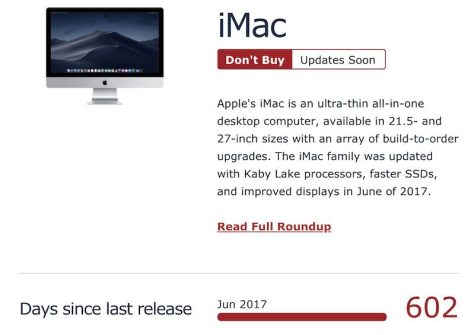 In fairness, the iMac Pro was released in December 2017, but standard 21.5-inch and 27-inch iMac models have not been updated in over a year and a half. Since the original iMac launched in 1998, the computer has typically been updated at least once per year, with the sole exceptions being 2016 and 2018.

The iMac is not alone. The 12-inch MacBook and Mac Pro have also set record-long spans of 602 days and 1,866 days and counting respectively since their last refreshes. Apple has at least promised to release an all-new Mac Pro with a “modular” design at some point in 2019, but has yet to share additional details.

Apple has hosted a March event in three out of the past four years, so perhaps we’ll see new iMacs and MacBooks at a March 2019 event. Other items on the agenda could include new iPad and iPad mini models, a new iPod touch, new AirPods, and the long-awaited AirPower mat if production rumors were true.