Which iPad is right for you?

If price is your biggest consideration, you’ll want to look at the basic 9.7-inch iPad, knowing it has older technology in it. If you’re looking for portability, check out the iPad mini, and if you want a mid-sized iPad with a bit more to offer than the entry-level iPad, check out the new iPad Air.

What about the iPad Pro? Apple’s high-end iPads are in a class by themselves, and it shows in the price. Unless you’re a pro-level user or cost is no object, you’ll probably want to look to cheaper options, but the iPad Pro models deliver cutting-edge technology for those who need it.

With that quick overview out of the way, let’s take a look at what each model has to offer.

Starting at the low end of the iPad price spectrum, Apple has the basic 9.7-inch iPad starting at $329 for the Wi-Fi only model. This iPad is perfect if you’re on a budget as it’s also frequently on sale, and is popular in the education field.

It has the most important features users are looking for in an iPad, like a generous display, Touch ID, and a decent rear camera, as well as support for the first-generation Apple Pencil if you’re into drawing, handwritten notes, and other tasks that don’t work quite as well with your finger. 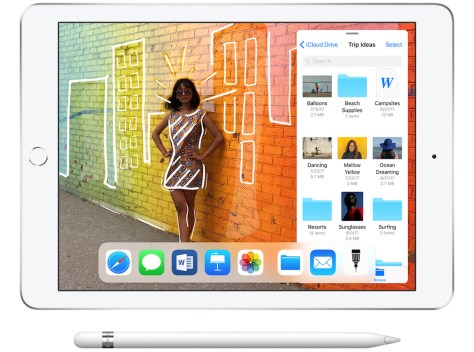 That low-end price tag does mean there are a few sacrifices, however, as the front FaceTime camera is relatively low resolution compared to other iPads and the display is a definite step down as it lacks rich wide color support, True Tone technology that automatically adjusts overall tone based on ambient light, and an antireflective coating that helps minimize glare on other models. The display also isn’t laminated to the cover glass, so you’ll notice a bit of an air gap rather than feeling like you’re directly touching the screen.

Next up is the newly-updated iPad mini, which starts at $399 for Wi-Fi only models. Apple’s refresh of this smaller-sized tablet improved its internals and introduced support for the first-generation Apple Pencil, making it a capable mid-range tablet with ultra portability.

With a display size of 7.9 inches, you can’t quite call it pocketable, but the iPad mini is definitely great for having something small on the go that still offers a much larger screen size than even Apple’s largest iPhones. 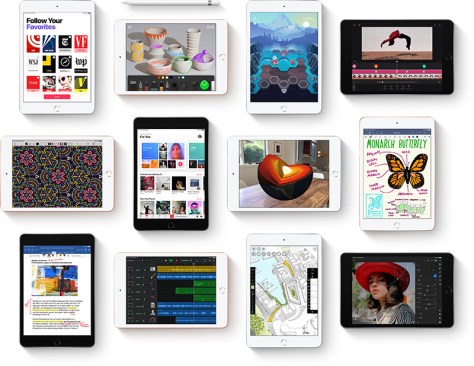 Looking beyond the display size, this is a very capable device using the same A12 Bionic chip from Apple’s latest iPhones, so it’s a speedy tablet. You’ll get an improved display compared to the entry-level iPad, a much better front FaceTime camera, and support for the first-generation Apple Pencil.

In the middle of the iPad family now sits the 10.5-inch iPad Air, starting at $499 for Wi-Fi only models. Apple’s brand-new iPad Air is now the perfect mid-tier option with a nice screen size, speedier internals, and first-generation Apple Pencil support.

The iPad Air and iPad mini have nearly identical specs aside from the display size, so size is likely going to be the most significant factor if you’re deciding between the two. 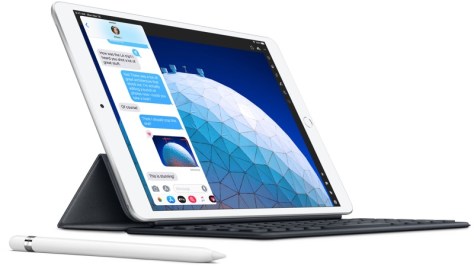 The only other significant difference is that the iPad Air has a Smart Connector for easy connection to a Smart Keyboard accessory if you prefer a hardware keyboard for your iPad. The iPad mini’s smaller size means it doesn’t support a Smart Keyboard, although you can still pair a Bluetooth keyboard with it if you like.

If you’re looking for true portable workstation power, then the last two iPads in the lineup — the iPad Pro models — could be what you’re interested in. These tablets were updated in late 2018 with Face ID and a near bezel-less design that mirrors the look of the iPhone X family.

These iPads, which start at $799 for the smaller 11-inch model and $999 for the 12.9-inch model, are a step up from the iPad Air in almost every way, from an improved “Liquid Retina” display with rounded corners and ProMotion technology for smoother display performance to a more powerful A12X chip and a better 12-megapixel rear camera with flash. You’ll also get support for the second-generation Apple Pencil, which magnetically attaches to the iPad Pro and charges wirelessly. 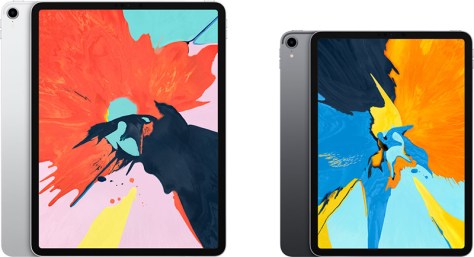 To be honest, the iPad Pro is overkill for most mainstream users, but if you’re a pro-level user or just want the latest technology, the iPad Pro has a lot to offer.

The main difference between the two iPad Pros is their screen sizes, so the following key specifications are for both models:

Now that we’ve looked at the base specs of each of iPad models, it’s time to think about various options like storage, cellular connectivity, and AppleCare+. 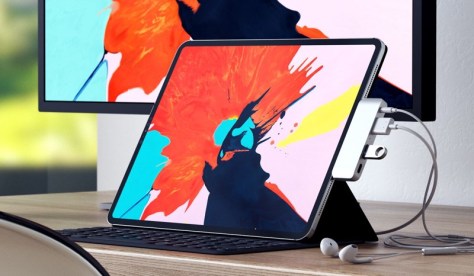 Power-heavy users should always look to the higher-capacity iPad models to ensure they don’t have to worry about constantly deleting apps and other files for storage space. Otherwise, Apple’s iCloud is a great way to offload files and lets you opt for a cheaper iPad with less storage.

Unless you’re storing a large local music library, downloading lots of video for offline playback, have a ton of huge apps, or doing pro-level work requiring lots of large files, mainstream users can usually get away with the lowest-tier storage options.

Cellular Connectivity: If you need to ensure that you can use your iPad at any time, including when you’re not near a Wi-Fi connection, you can opt for a Wi-Fi + Cellular option to ensure you’re always connected.

Cellular support adds $130–$150 onto the price of all corresponding Wi-Fi iPad models, depending on which iPad and which storage capacity. You’ll also have to sign up for a data plan for an additional cost with a supported carrier, like AT&T, Sprint, T-Mobile, or Verizon in the United States.

All told, it’s not a cheap upgrade, and many users prefer using their phone as a hotspot to deliver connectivity to a Wi-Fi iPad while on the go. But if you’re phone plan doesn’t allow for hotspot usage or you just want the convenience of having your iPad connected directly to a cellular network at all times, the option is there.

AppleCare+: New iPads come with one year of hardware repair coverage through Apple’s limited warranty policy, as well as up to 90 days of complimentary support. But if you want more coverage, Apple offers optional AppleCare+ packages priced at $69 for the 9.7-inch iPad, iPad mini, and iPad Air or $129 for the iPad Pro.

AppleCare+ extends your iPad‘s coverage to two years from the purchase date and adds up to two incidents of accidental damage coverage, subject to a service fee of $49 plus applicable taxes in the United States. Prices vary elsewhere. 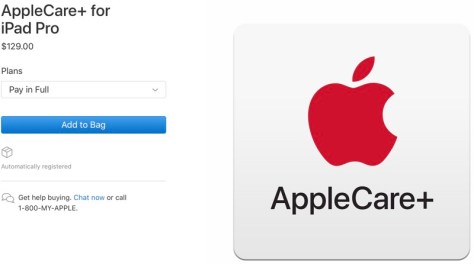 Apple charges high fees for accidental damage to a new iPad without AppleCare+, so as with most forms of insurance, the plan can pay for itself if ever used. AppleCare+ must be added within 60 days of purchasing a device.

Each iPad has a plethora of accessories to choose from for protection, style, or usability, many of which Apple creates and sells itself on Apple.com and in Apple retail stores.

Apple Pencil: The Apple Pencil is a stylus most popular with artists but also used by others, providing a comfortable and streamlined way to interact with the tablet. The second-generation Apple Pencil introduced sleek design changes, magnetic charging on iPad Pro, and gesture controls, none of which are available on the original Apple Pencil. 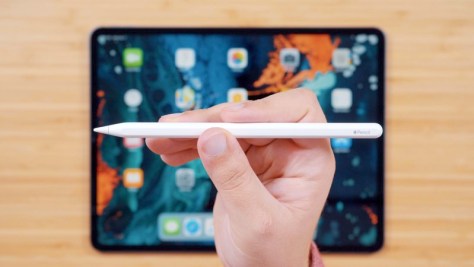 In the end, if you’re only looking to purchase an iPad as a convenient app-browsing, email-checking, or FaceTime device, you don’t need an Apple Pencil. But if you’re an artist or other creative with a penchant for drawing or taking digital handwritten notes, Apple’s stylus is definitely an enhancement to the iPad experience.

For a more in-depth look at the differences between the two Apple Pencils, check out our comparison.

These cases magnetically attach to your iPad, offering a degree of protection while also allowing you to place the tablet in numerous angled positions. The difference between the two is that the iPad Pro‘s Smart Folio cases protect the rear of the tablet as well as the front, while the Smart Cover cases only protect the front.

Keyboards: If you’re looking to do a lot of work on an iPad Pro, Apple also sells the Smart Keyboard Folio at $179.00 for the 11-inch model and $199.00 for the 12.9-inch model. This case is just like the Smart Folio, with an added Bluetooth keyboard for enhanced productivity. A similar accessory is available for the 10.5-inch iPad Air. 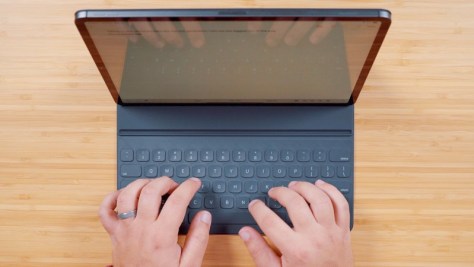 These Apple-made cases are compatible with iPads that have a Smart Keyboard connector, which is a special port that magnetically attaches the keyboard to the side of the iPad.

Otherwise, you can also look into popular iPad keyboard manufacturers like Brydge, Logitech, and Belkin, all of which sell Bluetooth keyboards that connect to iPads wirelessly. Keyboard cases are more expensive than your average case due to the added input use, but if you really plan on doing a lot of work and writing on your iPad, the two-in-one keyboard/protection combo is the way to go. The hardware keyboards give a much better typing experience and free up screen space on your iPad by getting rid of the software keyboard.

Cables: Apple’s iPad lineup now has differing cable standard, making matters a bit confusing. The easy way to remember is that if you’re purchasing anything that’s not an iPad Pro, you’ll be charging the iPad with a regular Apple Lightning cable. 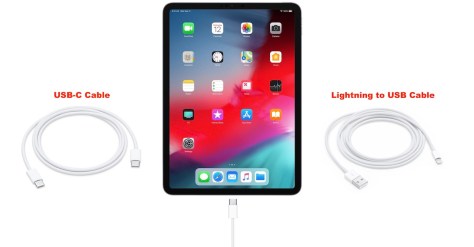 If you’re going with an iPad Pro, then you’ll be using USB-C cables. All iPads come with their required cables in the box, but if you don’t have many around the house it’s always a good idea to stock up on more. Apple sells individual cables, but you can always shop around on Amazon for cheap and reliable brands like Anker, Aukey, and RAVPower.

So… Which iPad Should You Buy?

Overall, Apple’s brand-new 10.5-inch iPad Air is a perfect all-encompassing tablet that should hit the check marks for many buyers. You can do everything from quickly browsing Twitter and checking emails to getting a few hours of work done with a paired keyboard, which isn’t bad for the $499 starting price.

If you’re someone who has preferred the 7.9-inch form factor of the iPad mini over the years, Apple’s latest small-sized tablet is well worth the update and has nearly all of the features of the new iPad Air. The iPad mini doesn’t have a Smart Keyboard connector like the iPad Air or a Smart Keyboard case of its own, but since the iPad mini isn’t exactly a workstation device, that’s not a bad trade-off (plus, you can still connect it to a Bluetooth keyboard if you want).

For $100 less than the iPad Air at $399 (64GB Wi-Fi), you’ll still have a nice laminated display with True Tone and antireflective coating, Touch ID, the speedy A12 Bionic chip, first-generation Apple Pencil support, and the same cameras, all in an ultra-portable 7.9-inch tablet.

If you’re shopping around for a cheap tablet for a kid, definitely consider Apple’s 9.7-inch iPad, which sees discounts below its $329 price tag pretty often. Sale prices in the $230–$250 range are not unheard of, and pairing the iPad with a super-rugged child-proof case is a perfect birthday or holiday present. Frugal shoppers should also check out Apple’s refurbished store to shop around for older-model iPads offered at discount.

And, of course, on the other end are the power users. If you’re willing to spend the money to spec-out a 12.9-inch iPad Pro, you’ll get a super reliable mobile workstation with 10-hour battery life in a 1.4 lb package. If you travel frequently for work, or just like setting up at a coffee shop during the day, the iPad Pro has a chance to become your MacBook replacement with a paired keyboard.

The most recent additions to Apple’s iPad lineup provides a wide variety of options and offers clear distinctions between tablets that should help make your decision a little easier.