Apple continues to dominate when it comes to customer support, according to Laptop Mag‘s annual tech support showdown, which is designed to help customers determine which companies are offering the most reliable customer service in the tech industry. 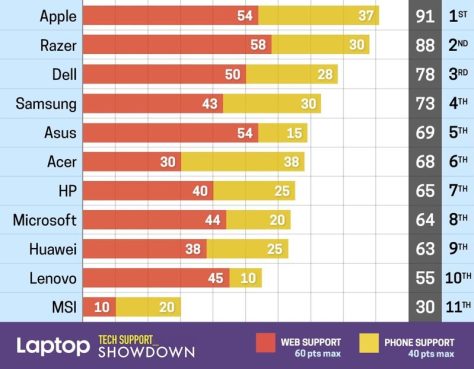 In a more in-depth breakdown of Apple’s score, Laptop Mag says its editors queried Apple about Dark Mode in macOS Mojave, disabling automatic updates, and turning off the webcams (something not possible).

Live chat was determined to be the best Apple support experience, and it took between 4 and 9 minutes for live chat staff to walk Laptop Mag through answers to its queries. Phone support was also quick, thorough, and helpful.

Larry was surprised when I told him I wanted to disable the MacBook Air‘s webcam. After saying he typically just puts tape over his webcam, Larry asked me to wait for 3 to 5 minutes while he checked to see if anything else were possible. Two minutes later, Larry was back on the call to walk me through the System Preferences app and show me how to disable webcam access, app by app. He also noted there might be a “fancier” way to disable the webcam via the Library (it’s actually in the Terminal program), but that this was easier.

Few companies even came close to beating Apple’s score of 91 in the Tech Support Showdown, but Razer, the number two company, scored an 88 and Dell scored a 73. Apple competitor Samsung earned a score of 73, while Microsoft got a 64.

As always, Laptop Mag arrived at these scores by posing as everyday PC and Mac users to get answers to three questions from major laptop manufacturers. Both the online and telephone support systems were tested. 100 points total were possible, 60 from online support because it’s a more popular way to get help, and 40 from phone support.

Microsoft has revealed that one of its support agent’s credentials were compromised, enabling unauthorized parties to access information from a “limited subset” of users, including e-mail addresses, folder names, subject lines, and the names of recent recipients, between January 1 and March 28 of 2019. 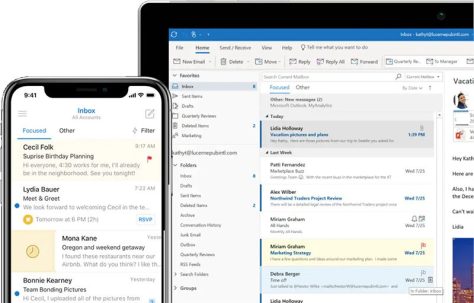 It gets worse, unfortunately. In a statement issued to The Verge, Microsoft said that the unauthorized parties had access to the actual content of roughly six percent of affected email accounts, as exposed by Motherboard.

In an email to affected users shared by TechCrunch, Microsoft said it has now blocked this unauthorized access, disabled the passwords of compromised accounts, and increased detection and monitoring to further protect users. Microsoft recommends users change their passwords out of an abundance of caution.

The breach affected a “limited subset” of Microsoft-managed email accounts, including Outlook, MSN, and Hotmail email addresses. No enterprise customers are believed to be affected, according to TechCrunch.

Microsoft told affected users that it has no indication why the information was viewed or how it may have been used. The company has yet to reveal how it discovered the breach, how the support agent’s credentials were compromised, or if the agent was a Microsoft employee, according to TechCrunch.

Microsoft is planning to launch a pair of wireless earbuds under the Surface brand that will be a direct competitor to Apple’s AirPods, according to sources familiar with the company’s plans who spoke to Thurrott. The earbuds are currently in development under the code name “Morrison.” 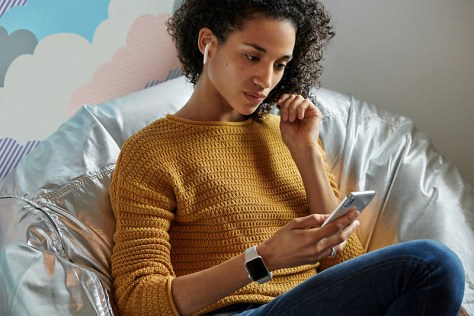 These are described to be in-ear wireless headphones, just like the AirPods. This isn’t the first time Microsoft has created and sold its own headphones, as it currently sells the $349.99 Surface Headphones on its website.

The Surface Headphones are large, over-ear headphones with advanced features like noise cancellation. The new device would likely carry over a few features seen in the Surface Headphones, however, like Cortana integration and “a way to improve interactions between a phone and the earbuds to make reading content easier on the phone.”

At this time, the name of the earbuds is not yet confirmed, but the simple moniker of “Surface Buds” is said to have been tossed around within the company.

Skype has begun testing a feature on the iOS and Android beta versions of the company’s app, allowing users to share their screens during a call (via The Verge). According to Microsoft, this will let users share a PowerPoint presentation with coworkers, browse dating apps with friends, or go online shopping with a family member.

To see the new addition, you must be part of the Skype Insider program for beta testers, which you can sign up for on the company’s website. To get to screen sharing, beta testers can tap on the ellipsis icon during a call and select “Share Screen.” Skype didn’t give any indication about a wider launch for the feature.