Twitter today updated its TweetDeck for Mac app to introduce a new compose window with a refreshed look and new capabilities.

The updated window features a cleaner design with either a dark theme or a light theme based on your preferences. In the screenshot below, the darker theme is depicted, with the original window on the left and the new window on the right. 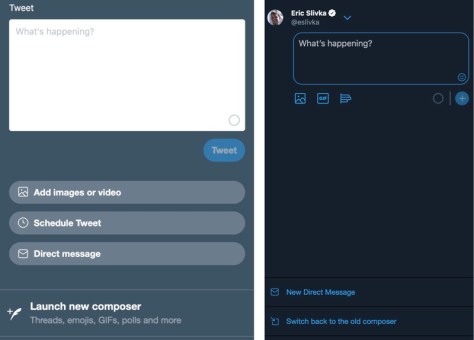 The compose window now includes support for adding GIFs to a tweet, a new addition to TweetDeck, and there’s also an option for creating a poll. A new emoji picker has been added, and support for image descriptions and tags is new.

TweetDeck is providing an option to swap between the new compose window and the old, so those who prefer the original interface can stick with it for the time being.

Guess what? You’re in luck! As of today we’re testing a new way of Tweeting, now with the ability to add GIFs, threads, polls, emoji AND image tagging via TweetDeck 🎉🙌🎊

The new features are part of a server side update, so you don’t need to download a new version of the app to get the updated compose window.

TweetDeck for Mac can be downloaded from the Mac App Store for free. [Direct Link]